This was a new name for me to research, which is always a fun thing to do :o) Robbie Cooper was born in 1969 and therefore has been brought up in a world where there has been quite a few technological advancements that would have been gradually introduced throughout his childhood and early adulthood. A few years younger than me, he would have seen colour TVs appear, have had less than 4 TV channels, possibly not had PCs at school and laughs at 1980’s films where brick like mobile phones were considered state of the art, but unlike even younger people remembers owning one!

Maybe it then comes as no surprise that whilst discussing the gaming world, with a client he was photographing, and how we interact within the virtual world, he was fascinated by how real life people see themselves when venturing out into the ether.

Starting in 2002 Cooper travelled the world for three years, capturing images of 62 virtual world players, placing their portraits next to their avatars. (Games/platforms such as Lineage, Second Life, City of Heroes, Everquest and World of Warcraft) The resultant photographs have been described as:

” poignant, powerful, remarkably eye-opening….fascinating and [a] profoundly human glimpse of our quest for self-hood, identity, and social belonging”

His book,  Alter Ego: Avatars and their Creators – published in 2007 – also contains micro-essays by each gamer  that “offer a layered look at how we assemble our personas in a way that transcends the physicality of our bodies, our genetics, and our circumstances.”

It amused me that he had a virtual launch party for the book.

On looking at some of the examples online I found that write up to be accurate. People swapped genders, looked like themselves, but older or younger, whilst others used the opportunity to transform themselves into hero figures, or merely wished to appear normal in a virtual world where in their day to day existence they fail to be recognised by anything other than their colour or disability. 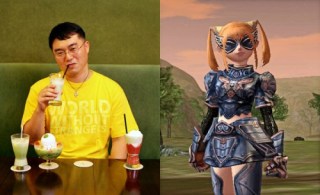 I think that this series of photographs not only serves to document a fascinating period in our technological advancements  and an amazing pop culture phenomena, but there is an insight into how people choose or view their own identities. I strongly identify with living in a virtual world, I connect with friends around the globe through Facebook, previously I have been a moderator for a large ISP volunteering to host chat rooms and monitor message boards. In these worlds people were just words on a screen, you could choose the colour and style of font, use add-on programmes to share music with each other and have private IMs where you could be anyone you wanted to be. We didn’t have avatars, but if you swapped images who knew if they were real, and occasionally they would be cartoons or obviously fake. Most of the time I “sat” in my red velvet dungeon with whips n wellies with a Kevlar vest ready to hand in case the natives got restless! Good job they couldn’t see me in my dressing gown, biscuit in hand sat in a computer chair held together with gaffer tape! And now I communicate across the world with other students some of whom I have met others wave across the wires… oh and Habbo Hotel…bit of a fad, we didn’t use that much but was a giggle for a while… it’s ok, you can run away and slam the door behind you now…

Each of the participants personal accounts “provide a richness of detail and honest psychological insight to each of the players and how they relate to, and value, their alter egos.” I can also empathise with this. The volunteer programme I worked with was cancelled and we had to delete our host names by a certain deadline, we all sat in a chat room watching all familiar names vanish from our “buddy lists” one by one… Even now many years on it still feels slightly raw thinking about the close knit community we had that went overnight. I still keep in contact with some but it isn’t the same. Without having the book and reading all the information it’s hard to say if their emotional investment comes across, but to anyone who doubts, the virtual world is far more real than can be imagined.

For me this body of work is, on a personal level, a fantastic example of visual ethnography and of how modern technology can influence new documentary work.

In particular the quote in the coursework really rang true for me:

A documentary [photograph,film] takes an audience to an existing or past reality and is so compelling that they can empathise with mind, emotion and imagination. In that sense documentary is an ambitious creative and critical enterprise (de Jong, Knudsen & Rothwell, 2011, p23)

I have written a lot about Alter Egos but in 2008, inspired by his previous body of work, Cooper began to work on a similar project called Immersion.  The photographs are taken from from head-on film footage of children as they play video games such as Halo 3, Call of Duty, GTA 4, Tekken and Star Wars Battlefront. Using a technique developed by film maker Errol Morris dubbed “Interrotron”,’ where autocues were adapted to project the screen display of the game on to the lens of the camera,  therefore capturing the intense expressions of concentration as the children immerse themselves into these games.  Given the violent nature of some the mix of deadpan or relish is quite disconcerting.

Planned as an ongoing project it is disappointing that all links to  his webpages seem to be dead so I couldn’t discover much about the final end result. This is a great example of visual ethnography ; Cooper collaborating with a psychologist and sociologist “to interpret the results in light of the psychological profiles of the individual children.” Whilst I found this interesting to watch and, as a parent relate-able, I did not find it as emotionally engaging as Alter Egos. But it is an excellent example of how to develop and sustain a practice, of how one project can influence another and, by collaborating, can open your work up to different audiences. When asked if what he was doing was either sociological research or an art project, Cooper emphatically replied, ‘Both.’

A link to some of the video footage can be found here.

‘It seems possible that there’s a link between violent games and social aggression, bullying or exclusion; but whether the violent game is the biggest factor in that, it’s hard to say. I think a lot of what has been said so far about the effect of media violence on children doesn’t take into consideration the psychological make-up of individual kids, and how big an impact the different types of media violence have on different children.’

Words and Pictures from the Middle East & Balkans

Hi, and welcome to my blog. Any images by other photographers used on this site are accredited and are being used only for personal educational purposes.