Whilst out and about in London with friends we decided to be cultural and take in a few exhibitions and galleries that were new to us. A quick Google and we came across GRAD.

We act as an engaging social and visual platform to encourage creative dialogues, create cultural links, and question long established preconceptions of Russian and post-Soviet culture.

The exhibition they had on at the time was Destined to be Happy  by Irina Korina, a surreal art installation that I thought was amazing! But that could be due to my warped mind and sense of fun.

Irina Korina is known for her installations of large-scale sculptures that weave narratives through the interplay of textures, material and scale. Her work often recalls the décor of ordinary Russian homes and Korina favours every-day, disposable and often industrially-produced materials for her works, ranging from textiles and plastic to plasticine. Within her installations the artist often contrasts allusions to local and global concerns, presenting epic ideas in tandem with colloquial and local references. Through these pseudo-monumental sculptures the artist addresses issues such as collective memory and social history.

You entered via the rear of the gallery to access the installation, walking through a darkened tunnel of black plastic, into a weird disorientating world: a monochrome world consisting of a forest of dead and burnt trees, corrugated iron ‘walls’ and tons of industrial plastic sheeting. In amongst the tangled confusion were large life-sized characters, legs protruding from mascot-like costumes, lying on the floor. Artist Irina Korina explains:

The title initially draws the viewer to the characters that are lying on the floor. There are 6 characters who can be associated with so-called “people-sandwiches”, those ones who are walking on the streets with the advertisement banners on them. They are usually poor people who could only manage to get a job like that. There is also the topic which interests me a lot- the relationships between appearance and the internal things. The fact that you don’t see the characters faces inside their funny costumes creates the dramatic effect and provokes a sick feeling of horror. So “Destined to be Happy” means that there is an attractive and fake appearance which doesn’t show the reality or truth. The title of course pertains first to the characters, yet thinking globally it signifies the mismatch between the expectations and the reality.

Some of the audience  said it reminded them of a ‘dystopian Christmas’, and I totally get their point as you wander through it, getting glimpses of the blackened pine trees. There is an assault on every sense as the smell of burnt wood pervaded the nostrils and weird sounds echoed intermittently throughout the room. There was a notice ‘there is nothing more permanent in the world than the temporary thing’.

As well as giving a different perspective on the surreal, this exhibition also gave a totally different take on a sense of time and place. In an interview with Elena Markocheva, Irina was asked:

G.Many of your exhibitions that took place in Russia and around the world were about your attitude to the 1990’s. Does “Destined to be Happy” have a connection with this period of time too?

…the reference to 90s probably happens subconsciously. The exhibition is all about the ambiguity and confusion which I feel in nowadays Russia. This project shows the confusion about where everything is moving. For me it somehow resembles to the mythological feeling of a time when you move somewhere with an aim, but then you lose your way and become uncertain about your destination…it was important to create the area of uncertainty and suspense where the viewer doesn’t have the orientating points and support; nothing to rely on to feel stability.

On looking at the contrast between B&W and colour documentary it was interesting to note that this exhibition was constructed using a black and white colour palette.

It is connected with the filters which people use on social media like Instagram and Facebook. They make their beautiful photos even more beautiful and the reality even more real. This exhibition is as if it went through black and white filter; it is achieved beforehand, having already passed as history.

Korina also wanted to show explore communication through social media and the extent that we employ Emojis.  Children and adults use them as hieroglyphs nowadays, a new language, a fixed amount of pictures which can explain many things. By juxtaposing concepts of ‘global and local, epic and colloquial, physical and virtual, Korina continues her anthropological research into the paradoxes of human behavior’.  Addressing issues memory, cultural and social history to challenge our traditional perceptions of everyday routine.

Emoji language seems to be incredible for me. Look attentively to the characters on the floor- their costumes look exactly like emojis.

The Christmas trees were one of her favourite elements of ‘the visual dictionary.’ The spruce trees signify many different emotions for her: these trees are grown for one evening only and then they are thrown away.

I would like to recall this idea to people at Christmas time and to make them feel sad that the party is going to be over.

The exhibition venue has silver confetti strewn across the floor, which creates the feeling that you are at the middle stage of a party where suddenly ‘you don’t understand what are you doing there. The party becomes somehow frozen, without culmination and development.’

I’m not sure I understood her reasoning behind the soundtrack which seemed to include grunting pigs and pulsating brainwashing type music, and if I remember a chattering sound.

With the music myself and the composer Sergey Kasich wanted to let the visitor know that the exhibition venue is somehow a cinematic adventure and the space you are in has some kind of plot. I am very happy to work with Sergey as it was him who created this atmosphere too. The sounds which might be thought to be unimportant in fact play a huge role. I like it very much. 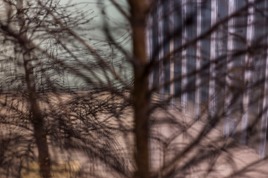 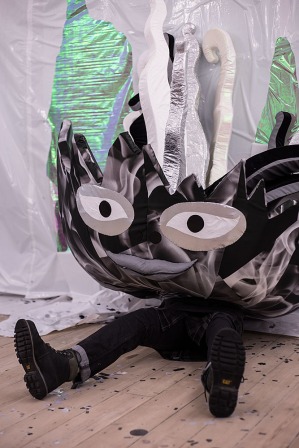 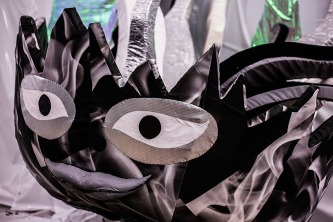 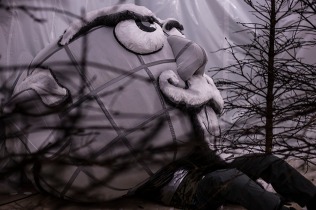 I enjoyed this exhibition very much and within some of  the photographs I took tried to capture the surreal elements in an equally surreal manner, cropping, shallow dof and deliberate blur.

What did I take away from this exhibition?

Words and Pictures from the Middle East & Balkans

Hi, and welcome to my blog. Any images by other photographers used on this site are accredited and are being used only for personal educational purposes.